Money-Socialism
The real cause of the new global depression

Only a small number of economists worldwide foresaw the current global financial crisis. These few, without exception, are all members of the Austrian School of Economics, whose best known representative is the Nobel Prize winner Friedrich A. von Hayek. Back in 1976, he had pressed for a renunciation of state monopolistic paper money, a denationalization of money. The survival of civilization, no less, could depend on it, Hayek claimed.

Roland Baader has an MSc in Economics, was a student of Hayek, and is a prominent representative of the Austrian School in Germany. Like many "Austrians" in the United States, Baader accurately predicted the financial crisis that started in 2007. His book Geld, Gold und Gottspieler (Money, Gold and Playing God), published in 2005, had the subtitle On the eve of the next world economic crisis.

Unlike the erroneous theories shaped by the inflationist (Keynesian) zeitgeist that dominates the Economics university faculties and the media around the globe, up to now only the economists of the Austrian School have worked out the true causes of the current world depression. And because their diagnoses are correct and logically stringent, their suggested therapies also point to the only effective way the Western industrialized nations have of escaping the unimaginable scale of impending impoverishment and disintegration.

We are just at the start of an unprecedented world depression, and only a swift transition to a sound private currency can save us from the worst. Baader offers us both an analysis of the causes of the depression and shows us ways out of it with scientific precision, but, as always, in terms that are easy to understand.

This book, his sixteenth, is possibly the last and most profoundly rousing wake-up call of the great German libertarian thinker. 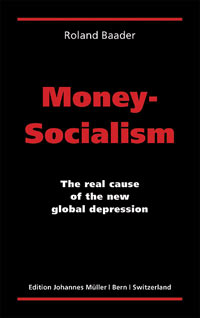 This book is also available in the following languages: